A series of reports issued by the PIRC has led to a significant police review of how people are dealt with while in custody.

Police Scotland has set up a special working group to examine what improvements are required to better observe prisoners while in police custody.

People who are identified by police custody staff as being high risk prisoners, due to having sustained injury or having other identified vulnerabilities, may be placed under increased levels of scrutiny and monitoring while in police cells. In the most serious cases, a person may be subject to constant monitoring by officers or custody staff using in-cell CCTV or by physically observing the person.

Several issues relating to constant monitoring were identified in a number of PIRC investigations, including:

The Commissioner has commended the decision by Police Scotland to urgently examine this high risk area of policing and considers it important that the findings and learning from a number of PIRC investigations are taken into account when considering any necessary improvements.

Police Scotland is considering a number of recommendations made by the Commissioner, including that officers and custody staff undertaking observations are effectively briefed about prisoner vulnerabilities by custody supervisors and receive necessary and appropriate breaks.

This issue is highlighted in our recent Learning Point publication, which also includes a report from our Review Team on how police are improving custody procedures following complaints made by the public.

The focus on prisoner monitoring comes after we recently investigated an incident where a woman sustained a serious injury while under constant observations in police custody.

The investigation identified a number of issues relating to the implementation of constant observations and noted that similar concerns had previously been identified during other PIRC investigations into serious injuries and deaths in custody.

In some custody suites across the Police Scotland estate the quality of CCTV images is poor. Officers or staff tasked with undertaking constant observations using CCTV may have to watch several prisoners at one time often on small screens, making it difficult to determine if a person becomes unwell or suffers injury.

On many occasions, audio, which may alert monitoring staff that something is amiss, is also unavailable. Remaining vigilant at all times during the monitoring of prisoners is absolutely paramount. However, studies have shown that carrying out a repetitive or tedious task over prolonged periods of time can cause vigilance decrement - a reduction in vigilance over a period of time. Vigilance can, however, be improved through training, prolonging the time that someone dedicated to such tasks can undertake observations effectively.

In a number of investigations carried out by the PIRC, prompt action by monitoring officers has undoubtedly saved the lives of people who became unwell in police custody or who attempted to self-harm, illustrating the impact that well trained and alert officers can make through effective and early intervention.

Following the findings of a PIRC investigation into a death in custody, Police Scotland Custody Division established a short life working group (SLWG) to consider improvements in custody processes.

The Commissioner has also recommended to Police Scotland that it:

The treatment of people in police custody was also highlighted by our Review Team.

In Complaint Handling Review (PIRC/00504/19), a member of the public complained about her experience in police custody.

The complainer became unwell while in her cell and there was a significant delay in the custody staff implementing cleaning procedures.

During our review, however, we could find no evidence that the organisational learning was shared or cascaded internally, resulting in the opportunity to prevent similar incidents in the future being lost.

Despite this, significant strides in changing the organisational culture and the perception of the complaints process internally have been made by Police Scotland over the last few years. It is evident, from our CHRs that in more and more cases, police complaint handlers are identifying and capturing learning, both organisational and individual.

To reinforce this, comprehensive new statutory guidance for handling complaints about the police in Scotland was recently published by the PIRC, bringing greater transparency, accountability and an increased focus on improvement.

The statutory guidance reflects a concerted effort by the PIRC and policing bodies to develop a more positive attitude to complaints. The aim is to promote and support a culture of continuous improvement through learning and development, resulting in more consistency in the handling of complaints by policing bodies in Scotland. 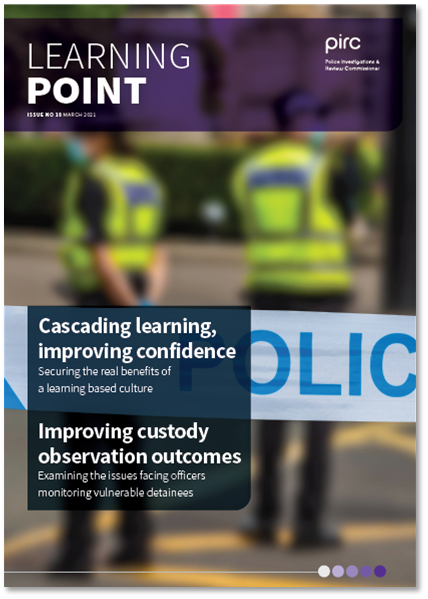 Ten CHRs published by the Review Team this week

Seven CHRs published by the Review Team this week