The Police Investigations and Review Commissioner has highlighted a culture of learning and development as key to improving confidence in policing in Scotland.

In her Annual Report and Accounts, published today, the Commissioner Michelle Macleod said that encouraging more constructive engagement between the PIRC and policing bodies has resulted in improvements that can help officers in real-time situations. This focus on shared learning has also improved officer safety.

The Police Investigations & Review Commissioner (PIRC) independently investigates incidents involving policing bodies across Scotland and reviews the way they handle complaints from members of the public.

In 2019-20, the PIRC saw a marked improvement in Police Scotland’s handling of complaints, with 62% of complaints found to have been reasonably dealt with. This is a significant improvement from 44% in the previous year and is the highest figure since the inception of the single force seven years ago.

A total of 76 independent investigations were carried out in relation to incidents involving the police, 32 of which related to criminal allegations referred by Crown Office and Procurator Fiscal Service (COPFS)– a 28% increase from the previous year, suggesting a shift towards serious matters being referred to the PIRC, rather than investigated internally by the police.

“The workload of the PIRC continues to increase with the Investigation Team experiencing its busiest ever year and the Review Team dealing with an increased number of cases.

“Since my appointment in August 2019, much of my focus has been on improving working relationships with our justice partners, while still providing independent scrutiny of police actions.  We have placed learning and improvement at the heart of our Complaint Handling Reviews (CHRs) and Investigations to foster more of a learning culture within policing in Scotland.”

A copy of the full Annual Report & Accounts can be found HERE. 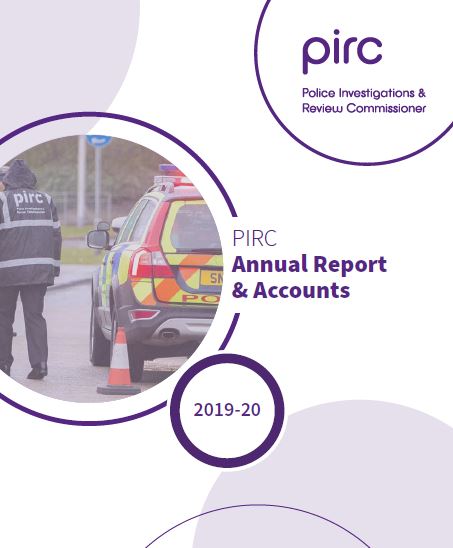